Here is a letter we received from St Helena Hospice relating to the Pig Race Night Event. 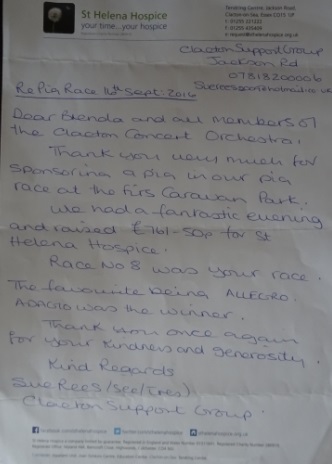 Here is a letter we received from St Helena Hospice relating to the New Year Cafe’ Concert.

Here are two letters we received from SSAFA and St Helena Hospice; they relate to the Remembrance Concert and the New Year Cafe’ Concert. 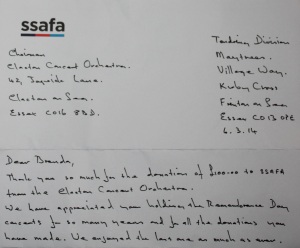 Clacton Concert Orchestra under conductor Francis Garland and leader Ruth Baker, are delighted to return to St Osyth Parish Church with a programme of music “We Love to Play…” The afternoon concert will be held on Sunday 21st July at 3:00pm.
The concert “We Love to Play…” will open with Mendelssohn’s evocative Hebrides Overture Fingal’s Cave, next, and in celebration of St Osyth’s beautiful new piano, Francis Garland puts down his baton to play Mozart’s twelve variations on the theme Twinkle Twinkle Little Star, “Ah vous dirai-je, Maman”. A change of pace follows with the music from Harry Potter films. Ending the first half is Beethoven’s beautiful, powerful overture Egmont.
The second half of the concert is opened by some of our friends from Clacton Choral Society who will perform a medley of songs including Begin the Beguine and other favourites. Next is music from the stunning film and current favourite musical Les Miserables and lastly the theme music from the films Pirates of the Caribbean.
Tickets priced £7.00 (accompanied children free) are available from John Stiff Estate Agents 01255 820424 or from 01255 223455 or on the door on the day.
—

A kind letter from composer Lawrence Turner following our performance of his Symphony.

A thank you letter from the RAF Clacton.

A thank you letter from the SSAFA Clacton. 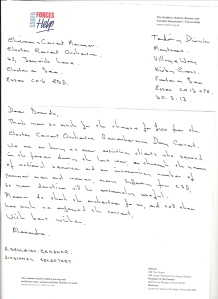 Please find below a kind letter we received from Ms Wall. 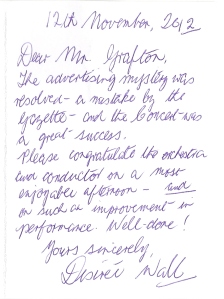 Following our donations to the Harwich Society and the Dovercourt Stroke Club, their representatives have expressed their gratitude in the letters you can see below (click on the image to enlarge).

Following our donation to St. Bartholomew church, the Honorary Secretary Mrs Bridget Nelson has expressed her gratitude in the letter you can see below (click on the image to enlarge). 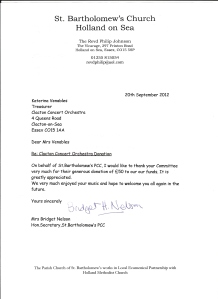 15 Mar 2012 – Following our donation to St Helena Hospice, Tendring Centre, the Clacton Support Group Secretary has expressed his gratitude through the following message:

“Thank you for your letter of 6th March, together with a cheque for £300. In respect of the Viennese Concert at the Princes Theatre. With the proceeds from the raffle, the total sum raised was £509. The efforts of all concerned in making this such an enjoyable and successful afternoon are very much appreciated.”

19 Jan 2012 – It is with great sadness that we share the news of the death of our dear friend and CCO Hon. Treasurer John Baker.

18 Jan 2012 – Following our donation to the Royal British Legion, the Clacton Branch Secretary Jamie Robinson has expressed his gratitude in the letter you can read below (click here to see the letter).

14 Dec 2011 – Dovercourt Christmas Lights look beautiful this year. We supported Harwich and Dovercourt Partnership Christmas Lights Appeal with part of the proceeds from our concert held on 17th July 2010 in Dovercourt. Following that concert we gave an equal amount to support The Harwich Society Bobbitts Hole nature appeal.

CCO wish to acknowlege  the tremendous loss which our community has suffered through the recent and very sudden death of our dear friend Peter Cobb.   The Orchestra could not have wished for a better friend, he will be sadly missed.

The season of CCO coffee concerts have gone very well and has been much enjoyed by players and audiences alike. St James’ Church  Little Clacton was holding a flower festival over the weekend of 23rd- 24th July, this made a wonderful backdrop for the players pictured below.

Parkers Garden Centre, Frinton on Sea was again a colourful backdrop for our players who entertained a large audience in the Garden Centre’s tea room on Sunday 28th August 2011 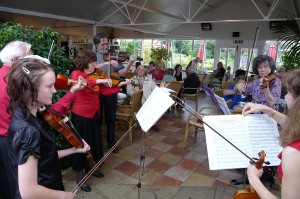 The Summer concert held at the parish church in St Osyth village on Saturday 16th July was very well attended and an altogether most enjoyable event. Two soloists were showcased, Katerina Venables – principal clarinittist with CCO, who performed the 1st movement of Bernard Crusell’s 1st Clarinet Concerto,  and guest player Anna Durance who performed Albinoni’s  Oboe Concerto No 7.   Both were technically  excellent, very musical and performed with great panache and style.  The concert opened with Rossini’s overture  The Theivish Magpie which beautifully imitated the impish magpie and culminated in a rousing finale.  The second half of the concert was devoted to Dvorak’s Symphony No 9 “From the New World”, a huge work for this amateur orchestra to undertake.  Conductor Francis Garland excelled himself, the attention to detail which he has brought to rehearsals paid dividends, the players under the leadership of their exxcellent leader Ruth Baker were on top of the music and played with sensitivity and great feeling, responding to their young conductor’s  firm hand on the performance.

The Viennese Cafe New Year Concert on Sunday 30th January 2011 at the Princes Theatre was a triumph for the Orchestra.  Tickets sold out, sadly we had to turn away patrons.  The ‘street scene’ layout in the theatre was a revelation and extremely popular.  Gradually our audience accepted the informality and strolled to the refreshments table at their leisure.  Most unfortunately sickness struck our baritone, but members and friends stepped into the breach and performed in the solo slots to much applause. A wonderful start to the year! See photos of this concert on Photos page 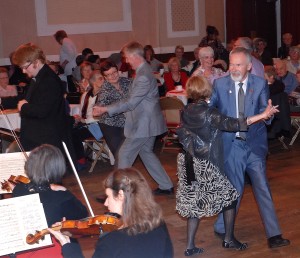 If you have an idea you want to share with us please feel free to contact brendajellis@yahoo.co.uk

2010 was a very busy year for Clacton Concert Orchestra and certainly a year during which we have made great efforts to get out into our community and share our passion for music!  This effort will be continued next year when we are joining forces with other music makers, both soloists and groups, who share our great passion and want to entertain.

Coffee Concerts are small gatherings of players from Clacton Concert Orchestra showing their various skills in combinations of duos, trios and up to octets, some players using instruments which are not seen in the usual orchestra setting. Three concerts have been held over the summer months, Jaywick Martello Art Centre, Hearts Delight Garden Centre and lastly Clacton Library where, during the afternoon, there was a footfall  of some 400 people, most of whom stayed to listed and join us in a cup coffee and a piece of cake!   These concerts are free of charge and there is no obligation to sit, a come and go as you please event with donations welcomed.

Another new venture was Harvest Festival at Wivenhoe Congregational Church where a small group of our players, under Francis and with Ruth,  provided music for the service.  Members of the Church kindly provided a supper after the service which gave our players an opportunity to share, to listen and to inform. We shall most certainly return to Wivenhoe!

We will certainly be adding coffee concerts to 2011 diary and will reach out in our community and perform music in whichever way we are asked and needed!